Because tomorrow is Halloween and I haven't used this song as a throwback yet.
Posted by Christine KAURdashian at 6:36 PM No comments:


A special happy birthday to the one & only @champagnepapi. Thanks for celebrating with us last night, we did your re-bar mitzvah right. #Poppy
A post shared by Poppy (@poppy) on Oct 24, 2017 at 10:29am PDT

It's October.
Halloween's around the corner and then we get into the holidays.
My birthday is near.
But before all of this is Drake's birthday. October's very own.
Some would say Drizzy's birthday is the official start of cuffing season. Drake's birthday is today, but the rapper celebrated on Monday with his closest friends....keep in mind some seemed new...if you get what I mean. 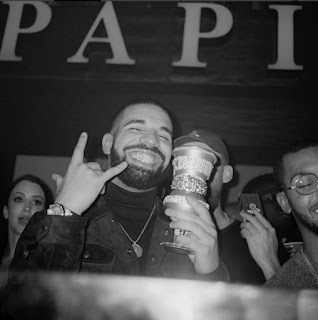 To mark this momentous occasion, the 6 God had a few of his famous friends over at West Hollywood hotspot, Poppy, to celebrate.
The theme? A Bar Mitzvah! Who could forget the precious video of Drake from his original Bar Mitzvah that went viral. 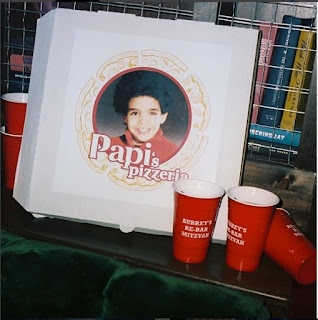 Stars like BFFs Leonardo DiCaprio and Tobey Maguire were present. Of course Drake's dad, Dennis, was there living it up with Bishop Don Magic Juan and his pimp cup. The Bay Area's own G-Eazy showed up as well as former-LA Laker Lamar Odom, Tracey Ellis-Ross, Kelly Rowland and many more.

The party was decorated with throwback Drake photos that most of us have seen online.


The Passionfruit crooner treated guests to Dippin' Dots and pizza at the soiree. Poppy even renamed itself, Papi for the occasion.


Father and Son photo,l am standing on the stage that’s the only way I am taller than Drake but I love this photo with the player glasses from @thedonjuanshow thanks my Brother we will treasure them always @champagnepapi 🙏🏼🙏🏼🙏🏼🙏🏼🙏🏼🙏🏼🙏🏼💯💯💯💯💯💯🍾Thanks @jenellling for the photo 👍🏽👍🏽👍🏽👍🏽👍🏽
A post shared by Dennis Graham (@therealdennisg) on Oct 24, 2017 at 6:39pm PDT

Drake and his father even did a duet!

In honor of Justin Timberlake's return to the Super Bowl halftime show.
Posted by Christine KAURdashian at 10:51 AM No comments:


DJ Khaled threw his son, Asahd, a birthday bash that grown adults would've died to have (*raises hand*).
The We the Best DJ and his son wore matching printed shirts and aqua-colored slacks to the bash.

Ashad's jungle-themed birthday party was held at club LIV at the Fountaine Bleu hotel in Miami. His party was hosted by Diddy and his daddy, Khaled, and among the attendees were LIV owner David Grutman and Jonathan Cheban. Even though this party was at a club, it did take place during the day, probably to keep the guest of honor's bedtime in mind.
With all the extravagance, the Khaled family also made time to give back. They partnered with UNICEF to ask fans to donate to the fund to help children around the world get blankets, toys and books in honor of Asahd's birthday. Some of Asahd's gifts were donated to UNICEF.

Me and my daddy @djkhaled are working with @UNICEF to honor the world’s children and celebrate my 1st birthday. ALL children deserve the right to receive gifts so we are asking #fanluv to make a donation to UNICEF on my behalf. HELP! Donate today! through the link in my bio 🙏🏼
A post shared by Asahd Tuck Khaled (@asahdkhaled) on Oct 17, 2017 at 1:34pm PDT

Check the pictures and video and get envious at this cute little guy's party.

#PART1 GOD THANK YOU SO MUCH I LOVE YOU SO MUCH ! @asahdkhaled I love you so much you are my life! my everything !Asahd what you have done for me and mommy is show us the true meaning of love is !! Asahd you bring JOY TO THE WORLD !! You are a 👑! Asahd your chosen !! Your smile your glow Is what I called THANK YOU GOD!!!!!!! Asahd I love you !!!!! HAPPY B DAY YOUR B DAY IS EVERYDAY EVERY SEC !!! I PROMISE YOU!!!!! ASAHD you took over @livmiami and had @diddy host your party wow!!! Thank you @davegrutman !! THANK YOU @hauteliving thank you @riaa_awards .. MAMA ASAHD MY QUEEN YIU DID A AMAZING JOB ME AND ASHAD WE LOVE YOU !!!
A post shared by DJ KHALED (@djkhaled) on Oct 22, 2017 at 5:46pm PDT


#PART2 ! @asahdkhaled you had @therealbettywright sing happy bday wit @diddy WOW!!! GOD THANK YOU SO MUCH I LOVE YOU SO MUCH ! @asahdkhaled I love you so much you are my life! my everything !Asahd what you have done for me and mommy is show us the true meaning of love is !! Asahd you bring JOY TO THE WORLD !! You are a 👑! Asahd your chosen !! Your smile your glow Is what I called THANK YOU GOD!!!!!!! Asahd I love you !!!!! HAPPY B DAY YOUR B DAY IS EVERYDAY EVERY SEC !!! I PROMISE YOU!!!!! ASAHD you took over @livmiami and had @diddy host your party wow!!! Thank you @davegrutman !! Thank you @hauteliving thank you @riaa_awards
A post shared by DJ KHALED (@djkhaled) on Oct 22, 2017 at 5:54pm PDT

Posted by Christine KAURdashian at 6:08 AM No comments:

14 years after #Nipplegate, Timberlake will once again perform at the Super Bowl halftime show.

Timberlake made the announcement via social media alongside pal, Jimmy Fallon.


In an interview with NBC Sports' Mike Tirico, Timberlake says there won't be another malfunction.


I'm looking forward to this. Timberlake has definitely matured from his last Super Bowl performance and hopefully has learned to no longer throw legends under the bus.

Posted by Christine KAURdashian at 5:36 AM No comments:

In honor of National Boss Day, what other way to celebrate than with the Boss himself!
Posted by Christine KAURdashian at 10:35 AM No comments:


So much is going on in our world right now and we just need to heal and come back to love.
Usually I'm not this into my feelings on the blog, but my day job is in news and covering the tragedy in Las Vegas last week and the devastating fires in the Bay Area today, I feel this is the musical hug we all need.
Posted by Christine KAURdashian at 6:03 PM No comments:


Waking up to the news in Las Vegas broke my heart.
You all know news is my day job, and working the story and already knowing how to cover stories like this hurt my heart because this is becoming so common.
I shouldn't know how to cover a story like this.
The shooting in Vegas struck a chord more than before because I was just there. Vegas has always been a place I felt safe.
Also, to take into account that this occurred at a music festival, as a concert and festival attendee this hurt even more.
Is nowhere safe?

The shooting killed about 58 people and injured 515.
Kids were there, on their parents' shoulders.
These people just wanted to see their favorite artists perform at the Route 91 Harvest festival. They were all there for one thing. music.
This all occurred while country star Jason Aldean performed.
Since then celebrities expressed their sorrow and pain following this ordeal.


My heart is breaking for Las Vegas. We need love, unity, peace, gun control & for people to look at this & call this what it is = terrorism.


Tonight has been beyond horrific. I still dont know what to say but wanted to let everyone know that Me and my Crew are safe. My Thoughts and prayers go out to everyone involved tonight. It hurts my heart that this would happen to anyone who was just coming out to enjoy what should have been a fun night. #heartbroken #stopthehate
A post shared by Jason Aldean (@jasonaldean) on Oct 2, 2017 at 1:17am PDT

Vegas. Heart breaks.
Prayers, love, support and strength to the victims and their families. Hug our loved ones that much tighter today.
— Dwayne Johnson (@TheRock) October 2, 2017

Devastated by the horrific attack in Las Vegas last night. If you're looking for loved ones in Vegas, call 1-866-535-5654 pic.twitter.com/gIlcsKFdLf
— Lauren Conrad (@LaurenConrad) October 2, 2017

Pining
for a time
when we
no longer
have weekly
tragedy.
Sending love
to Las Vegas.

My thoughts are with the victims, families, and performers who were affected by a senseless act of violence last night. #PrayForLasVegas
— Triple H (@TripleH) October 2, 2017

Woke up to the most devastating news about Las Vegas. I’m praying for everyone in Las Vegas!
— Kim Kardashian West (@KimKardashian) October 2, 2017

Horrified to hear about the shooting in #LasVegas. My thoughts are with the victims and their families. Praying for everyone's safety 🙏💔
— Mariah Carey (@MariahCarey) October 2, 2017

Saying a prayer for all the victims & their loved ones, also for the residents & visitors of Las Vegas! This was a horrific act of terror!!
— Rihanna (@rihanna) October 2, 2017


I can’t believe what is happening right now. My heart is on the floor. #prayforlasvegas 💔 📸by @mikesnedegar
A post shared by Holly Madison (@hollymadison) on Oct 2, 2017 at 1:07am PDT

Please join me in praying for the victims of the mass shooting tonight in my hometown. #PrayersForLasVegas
— Wayne Newton (@WayneNewtonMrLV) October 2, 2017

Prayers for all those affected, but we all know now that prayers aren't enough. We say this too often now.
Posted by Christine KAURdashian at 2:04 PM No comments:

I was going to refrain from posting a throwback this week due to the tragedy in Las Vegas. However, due to the recent passing of Tom Petty, I felt this song was very appropriate for the mood of today and what we all need as human beings during this time.
Posted by Christine KAURdashian at 1:44 PM No comments: