Posted by Christine KAURdashian at 10:11 AM No comments:

Wow! I can' t believe these two went through with this!

So, the rumors are true. Team Breezy and the Rihanna Navy have collaborated on not one but TWO remixes. The sexually-charged Birthday Cake featured on RiRi's album Talk that Talk and a new version of Brown's Turn Up the Music.

Even though Birthday Cake is pretty hot, it doesn't defeat the fact that Breezy flipped on Rihanna and her navy 3 years ago. We all know Rihanna likes to be the bad girl, but she's coming across as a stupid girl for still dealing with Brown's dumbass. And no, I don't think it was for publicity because these two don't need it. Sidenote: Brown is STILL on probation for the beating! Besides, RiRi is too fly to need to rely on Brown.

If the beating back in '09 didn't do anything for you, Ri....how about Chris making an ass of himself on Goodmorning America by breaking a window and leaving the studio topless?

I know alot of celebs like to say I'm not a role model, I don't intend to be. But seriously? The dude who beat you SO bad, humiliated you, even BIT your fingers...deserves a collabo? I used to think she tried too hard, and now I stand corrected.

Too bad I bought Talk that Talk before this remix came out.
Posted by Christine KAURdashian at 3:53 PM 1 comment:

So fitting for today.

Posted by Christine KAURdashian at 12:34 PM No comments: 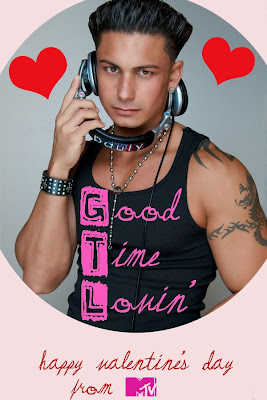 Since I'm not in elementary school anymore and there are no more class parties.....here's my virtual Valentine to all of you!

<3 Around the Bay Gal!
Posted by Christine KAURdashian at 10:50 AM 1 comment:

Since my brother's birthday is this week I had already planned on today's Throwback in advance, however since the recent passing of Ms. Whitney Houston I had to honor her as well. So, today's throwback monday I'm featuring TWO videos!

This one for my brother:


I Wish Skee lo by oublierleracismeskyblog

And this one is for Whitney :
"...If I should die this very day. Don't cry, 'cuz on earth we wasn't meant to stay...and no matter what the people say.....I'll be waiting for you after the Judgement Day."

Email ThisBlogThis!Share to TwitterShare to FacebookShare to Pinterest
Labels: I Wish I Was a Little Bit Taller, My Love is Your Love, Skee-Lo, Throwback Monday, Throwback Monday Special Edition, whitney houston

Damn, Yeezy and Hov where the hell you been?!
With the Ni**as in Paris music video, that is.
I tried to do a play on the lyrics from Otis.
Jay-Z and Kanye West's summer anthem has taken its sweet time on the music video front and has finally debuted this past week.

I've been anticipating this moment since I went to the Watch the Throne concert back in December when I found out they were filming for the video (at the concert I attended..among many others along the tour). Only to be very disappointed.

Seriously?! This is what you give us for one of the hottest songs on the WTT album? It looks like it took $15 to make this video with the split screen, illuminati-esque shapes and random cut-ins of royalty and zoo animals. I thought the video was going to show a montage of all the WTT shows along with backstage videos of 'Ye and Jay.

I guess the pair are busy with the birth of Blue Ivy and Kanye.....trying to holla at Kim Kardashian.
Posted by Christine KAURdashian at 4:13 AM No comments:

A sad day for the music industry.

I still can't believe this is true. I'm still in shock.

As we know, singer Whitney Houston was found "unresponsive" in her room at the Beverly Hills Hilton Hotel Saturday afternoon and later pronounced dead by her publicist. However, TMZ is reporting the 48 year old may have drowned in the bathtub.

TMZ reports:
No illegal drugs have been found in the hotel room where Whitney Houston died -- at least not yet -- but prescription drugs were present, and it's possible the singer drowned in the bathtub ... TMZ has learned.

Sources tell us ... when EMTs arrived Whitney's body was already removed from the bathtub so it will take an autopsy to determine if she OD'd, drowned or died from some other cause.

Informed sources tell us ... Beverly Hills cops -- who were still searching the room at the time this story was posted -- found various pill bottles. There was no evidence that Whitney was drinking alcohol in the room.
Whitney's body was just removed from the room on a gurney.  It will go to the morgue for an autopsy to determine cause of death.

I grew up with I Wanna Dance with Somebody, How Will I Know, the  Bodyguard & Waiting to Exhale soundtracks. Houston taught me that it's better to be alone than unhappy. It's sad that most of us don't appreciate someone until they're gone. It is sad that over the past 10 years we've all joked about Houston's crazy, drug-related antics only to forget how great of a talent she was.


R.I.P. Whitney Houston, hope you're finally at peace.
Posted by Christine KAURdashian at 1:56 AM No comments:

Email ThisBlogThis!Share to TwitterShare to FacebookShare to Pinterest
Labels: celebrity deaths, It's Not Right but it's Okay, When You Believe, whitney houston

We've all been anticipating this moment for a little over a month, and now the wait is over. The first photos of Blue Ivy Carter or Notorious B.I.C. have been released to the public through Jay's website Life +Times.

We can all breathe a sigh of relief that baby Blue looks nothing like those mock photos circling the internet since her birth. She's the most beautiful newborn I've seen in a long time, not counting my two nieces and nephew. She looks a lot like her Grandma Tina Knowles.

The power couple look so precious with their little princess. I bet Beyonce is a great mother, as well as Papa Hov. Now, I'm hoping my 6 month old nephew becomes a professional athlete so he can one day marry into the Carter family!
Posted by Christine KAURdashian at 1:21 AM No comments:

I was probably like 5 years old when this song came out.
Posted by Christine KAURdashian at 9:29 AM No comments:

Give Me All Your Luvin' Madonna and Nicki Minaj, Oh...and MIA too!


About freakin' time! I've been hearing about this Madge, Nicki and M.I.A. collabo for a while and it's finally released!

This video is getting me pumped for Madonna's half-time performance at the Super Bowl, well besides swooning over Tom Brady.

The Give Me All Your Luvin' video is basically all about the Material Girl with Nicki and M.I.A. cheering in the background.
My favorite part is when the three divas are all in their own Like a Virgin bridal dresses...minus a kiss on the lips from Madonna.

Guess Mama-Madonna learned her lesson after the 2004 VMAs.
Posted by Christine KAURdashian at 5:08 AM No comments: