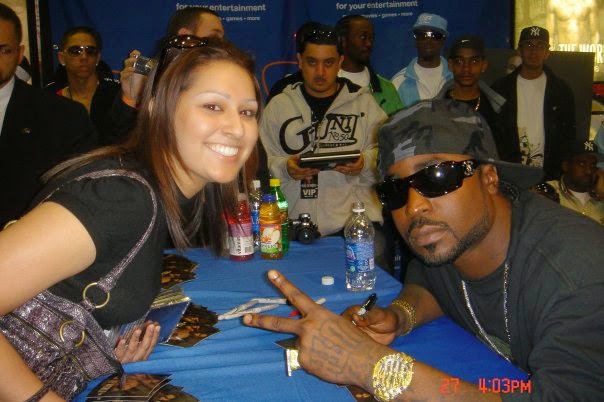 So as a PYT on  a school trip in NYC I had the pleasure of meeting Young Buck at an album signing for Buck the World.
This song cracks me up, especially the line:
"Now don't be in the club...throwing your rent money and be broke in the morning. 'Cuz I'll be laughing at yo broke ass."
Posted by Christine KAURdashian at 10:02 AM No comments:

Check out  my latest article to find the best products that are waterproof and sweatproof to help make you the hottest mermaid on the beach this summer.
Posted by Christine KAURdashian at 9:31 PM No comments:


Laaaaaddddiiiieees, and some gentlemen....
It's finally here!
The moment we've all been waiting for. The first official trailer for the Fifty Shades of Grey movie.
Complete with the red room and Grey's famous ripped jeans.
I.CAN'T.WAIT.
What do you think of the trailer?
Posted by Christine KAURdashian at 9:24 AM No comments:

YG is taking it back to his Bompton roots in his latest video Bicken Back Being Bool.
Chillin' playing dominoes and drinking 40's and a police chase.
This single/video comes off of his album My Krazy Life which features slappers like My Hitta, Who Do You Love, and Left, Right.
I really love this album. Totally reminds me of 1995 Dr. Dre, Eazy-E, Snoop Dogg, NWA, etc.
The video brings a Boyz in the Hood feel to his video and features Spruce St. His block.
Posted by Christine KAURdashian at 12:19 PM No comments:

Email ThisBlogThis!Share to TwitterShare to FacebookShare to Pinterest
Labels: Bicken back being bool, boyz in the hood, compton, my krazy life, YG

Oh, Ashanti. How this song truly sums up my emotions right now......because...hormones.
Posted by Christine KAURdashian at 9:35 AM No comments:

Working On My Fitness: Tone It Up's Garlic and Herb Turkey Burgers

With all that's going on in the celebrity world, I know I've been slacking on the Working On My Fitness portion of the blog.
I frequently visit, Tone It Up, because not only are the founders, Karena and Katrina, have bodies to die for, but they're always offering such encouraging words of support and make fitness fun!
They have super easy and delicious healthy recipes that I try to cook up whenever I get the chance.

Below is one of my favorites for lunch and/or dinner. I try to make these as often as possible to keep my on track of my weight-loss goals.

Email ThisBlogThis!Share to TwitterShare to FacebookShare to Pinterest
Labels: crossfit, garlic and herb turkey burgers, karena, katrina, tone it up, working on my fitness

Rub-a-Dub-Dub Khloe and Scott are in the Tub?!

What.the.hell!?
Just the other day, Khloe Kardashian posted a pic via what else- Instagram- with her chillin' in the bathtub with Lord Disick.
These two crack me up, and their shenanigans are one of the main reasons why I still watch  Keeping Up with the Kardashians.
This photo comes just days after reports surfaces that Disick was sent to the hospital last month after suffering from alcohol poisoning.

Follow my blog with Bloglovin
Posted by Christine KAURdashian at 11:58 AM No comments:


For the younger generation, you'll remember him from The Notebook and from 8 Simple Rules.
Your parents and grandparents will remember him from Maverick and The Rockford Files.
Actor James Garner died of natural causes Saturday evening at his home in the Brentwood area of Los Angeles. He was 86 years old.
The Associated Press reports that police responded to a call around 8 p.m.  and confirmed Garner's identity from family members. Garner had suffered a stroke in May 2008, just weeks after his 80th birthday.
"His quick-witted avoidance of conflict provided a refreshingly new take on the American hero, contrasting with the steely heroics of John Wayne and the fast trigger of Clint Eastwood.    It was in 1957 when the ABC network, desperate to compete on ratings-rich Sunday night, scheduled Maverick against CBS's powerhouse The Ed Sullivan Show and NBC's The Steve Allen Show. Maverick soon out polled them both. At a time when the networks were crowded with hard-eyed, traditional Western heroes, Bret Maverick provided a fresh breath of air. With his sardonic tone and his eagerness to talk his way out of a squabble rather than pull out his six-shooter, the con-artist Westerner seemed to scoff at the genre's values. "
"However in his 2011 memoir, The Garner Files, he provided some amusing and enlightening clues, including his penchant for bluntly expressed opinions and a practice for decking people who said something nasty to his face -- including an obnoxious fan and an abusive stepmother. They all deserved it, Garner declared in his book."
"When he received the Screen Actors Guild's lifetime achievement award in 2005, he quipped, 'I'm not at all sure how I got here.' "


Follow my blog with Bloglovin
Posted by Christine KAURdashian at 10:34 AM No comments:

We're getting closer and closer to the Valentine's Day release of the 50 Shades of Grey movie. The official trailer will be released on Thursday July 24th, but for now we have this teaser to hold us over. If you were a fan of the 50 Shades of Grey series, you know why Bey's slow-version of the "uh-oh" verse from Crazy in Love is relevant here. However, it never occurred to me that Beyonce was a 50 Shades fan! Her Majesty, Kin Bey, dropped the teaser via her Instagram account.
Can she seriously slay anymore!?!

Yes, I know....I've only been updating the blog with throwbacks.
I promise, you'll be seeing a lot more content in the next couple of days.
You know....life gets in the way.
But once I remembered this song, I had to post it.
Reminds me of my days being 21 years old...going out with my girlfriends Thursday-Saturday.
I can't even think about doing that now.
Posted by Christine KAURdashian at 9:31 AM No comments:

Okay, I've been belting this song out for the past few months and have to share it.
The video is so-so, but the song....ohhh, the song!
It has me booty-poppin' while driving.
I could just be biased because Derek King is from the Bay Area and he features the Yay's Sage the Gemini.

Posted by Christine KAURdashian at 10:25 AM No comments:

I used to love this song and the video is your typical R. Kelly drama, which is why I love it even more.
Posted by Christine KAURdashian at 10:10 AM No comments: