We all remember watching an episode or two of the Flintstones growing up. Cracking up over Fred's car tipping over after he orders that huge serving of ribs or dressing up as Pebbles for Halloween.

Here's to being 50 and Fabulous!
Posted by Christine KAURdashian at 10:05 PM No comments:

Go Shawty, It's Yo Birthday!

Unforunately Weezy will be spending his 28th birthday at the Riker's Island jail in New York City. However, reports says he's only in there for 37 more days (give or take)!
Posted by Christine KAURdashian at 6:43 PM No comments:

Can You Tell Me How to Get to the Sesame Shore?

I wish they would have had this when I was growing up!
Posted by Christine KAURdashian at 1:08 PM No comments:

Katie Couric said it best...."this seems to be a recurring role for Lohan".

LiLo is back in the slammer, however she is allowed bail.

TMZ says "Lindsay will have to get a SCRAM bracelet (this will be her third) within 24 hours -- and under the terms of her bail, she is not allowed to be around known drug users ... and must submit to search by law enforcement at any time. Also, nightclubs will be a major no-no ... Linds has to stay out of places where alcohol is the "chief item of sale."Lindsay Lohan will be a free woman soon, because a judge has just reversed Judge Elden Fox's decision and has granted LiLo bail ... TMZ has learned."

This girl is the epitome of a hot mess.

Send her to jail and make her stay there.

Sidenote: Why does she always look better in her booking photos than she does on the red carpet?
Posted by Christine KAURdashian at 6:46 PM No comments:

Too Steamy for the Street.....Sesame Street!

Katy Perry wanted to see the Sunny days sweepin' the clouds away....to try and get her pretty little self to Sesame St.

Parents felt Perry's outfit during her duet with Elmo was too revealing and inappropriate for the Street.

So, not one to disappoint, Sesame and Co. pulled the would-be Monday's episode.

People interested in the video can only see it online.


So Katy's mad because she got all dressed up for dress-up, not for tag!


Posted by Christine KAURdashian at 9:07 PM No comments:

First Tiny and T.I. were caught with a little somethin' somethin' in their car while cruising around....then Lindsay Lohan FAILED a drug test....now....BRUNO MARS!??

The "Just the Way You Are" singer was arrested in good ol' Viva Las Vegas after police found about 2.6 grams of coke on Mars!

Posted by Christine KAURdashian at 1:39 PM No comments:

I'm a little late in the game when it comes to listening Willow Smith's single Whip My Hair.

Tell me why this little Miss Willow has more swagger in her 9 years than I have in my 24?

She must get it from her Fresh Prince Papa!

On one hand I think she's a little too young to dress the way she's been dressing and acting...but her parents are Will and Jada. I'm sure they have everything in check.

Or they're going the Kate Gosselin route.

I can't wait for future collaborations...because you know a ton will come out the woodwork.

Will it be Beiber? Usher? Kanye? Weezy?

Hopefully NOT R. Kelly....Sorry I just went there.

Posted by Christine KAURdashian at 1:41 PM No comments:

My Favorite Songs At the Moment

I don't know about you, but I'm getting really sick and tired of hearing Love the Way You Like, Billionaire, Airplanes, Break Your Heart, Cooler Than Me and Nothin' On You on the radio.

So, I've been digging through Allhiphop.com and other music outlets to find some new tracks to listen to. Some of them are on the radio, but don't get played nearly enough.

One in a Million- Ne-Yo
Any Girl- Lloyd Banks and Lloyd (yes, I know...hard to believe it's true but they finally collaborate on a song!)
B.M.F.- Rick Ross
Home- Edward Sharpe and the Magnetic Zeroes (Totally not as hip-hop as the others, but I really like it)

Usually I'm cool off Ne-Yo because his joints and collaborations always get played out (and his swagger's kinf of cheesy) but I saw the music video to his latest single on 106 & Park and fell in love.

It reminds me of the days when Michael Jackson made his music videos into mini-movies.


This video is very The Way You Make Me Feel.
Normally, I don't like when people copy my MJ, I've got to give it to Ne-Yo in this one. He's really amazing. I may actually find his swagger attractive now.

Here's also the video to Any Girl- Lloyd Banks and Lloyd.
This video is very How to Be a Player-eque. Remember that 1997 movie with Bill Bellamy..the former MTV VJ? This video is a 3 minute version of that.


I could only find the uncensored version, so please excuse the rauchiness!

Posted by Christine KAURdashian at 9:06 PM No comments: 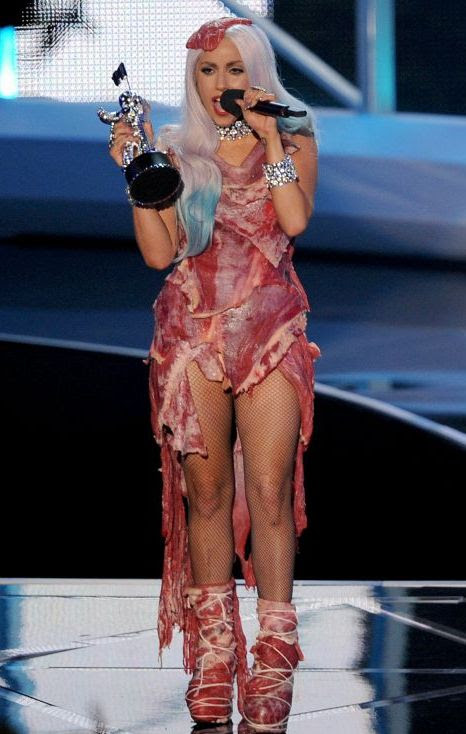 Keep in mind, this ensemble placed Gagaloo on Cojo's Best Dressed List this year!
All in all, I'm glad Gaga won all the awards she did...but this year's VMAs didn't impress me.
Where's the interruption of speeches? Where's Lil' Mama at the crash the stage again?
MTV....you disappointed me this year!
So did you Chelsea Handler!
Posted by Christine KAURdashian at 10:26 PM No comments:

American Idol Has A New Judge!

Reports claim Miss J-to-the L-O will be the new judge for American Idol this season.

She'll only be making $12 million, you know, no biggie!

I'm not a fan of the show, but I am a fan of Jennifer Lopez! So, maybe this season I'll actually watch! I think she'll make a fantastic judge! She's real, she has a great work ethic and she's the first one to do it ALL!
Posted by Christine KAURdashian at 8:03 PM No comments:

Guess Who I ran Into Lastnight?

No it wasn't an old friend from elementary school nor an ex-boyfriend.


Now, I have no photographic proof of the encounter because his security guard wouldn't allow it and the Young Money star confessed that he had imbibed a little too much for the photo.

Nonetheless it was really exciting.

The story goes as follows:

Drake was in town performing with numerous artists for this year's Summer Jam. After the concert he was to appear at a local club.

I didn't go to the concert considering ticket were overpriced, so a friend and I rounded up our funds to catch Drake at the club appearance.

Well, $50 later we arrived only to find that we were indeed duped! The former-Degrassi star didn't show up until 12:45am and with burly security guards in tow, walked through the dance floor into V.I.P., without as much as a wave to the fans who paid anywhere from $40-$60 to catch a glimpse of him.

"Ah well" I thought, "He's going to come back out and do a few shout outs, maybe rap a verse or two."

Roughly a half-hour later, I see a guy cut through the dancefloor again as it parted like Moses did the Red Sea and who was it? DRAKE! Again!

Seems like he was a little faster than his security team and he was heading out the DOOR! Already! I was miffed that I spent my money to only see him WALK by, so I grabbed his arm so at least say I touched him.

He's really not that tall, and a little soft. Not really buff.

So, my friend and I leave to a nearby diner to drown our sorrows in some latenight snacks. As we approach the restaurant we see two black Escalades pulled up front, one surrounded by "I don't play" guards in letterman jackets.

Wouldn't that be funny if that was Drake- I said to my friend.

After being shooed off by the wanna-be security guard Drake called out to us and asked if we liked the show.

We didn't go to the show, we were down the street at the club you made only a brief appearance at!- says I

Like the gentleman that he is, he apologized....then I proceeded to be a typical crazy fan.

Drake! I've been a fan of your's since Degrassi! I remember when your character, Jimmy, dated Ashley and Hazel! My mom's from Canada!!!!!

He looked at me sideways until I told him my mom's from his land of Maple Syrup and we started chatting it up a bit. I asked him where he was headed to next, and how he liked San Francisco.

It's hyphy- he says.

I then asked him if I could get a picture, but he said he was too tipsy.

You don't have to get out of the car! -I smartly reply

But his security guard looked like he was going to cut me if I persisted.

I then mention Degrassi again.....telling him how I was saddened his character ended up in a wheelchair.

After I fully embarassed myself, I told him to tell Lil' Wayne we miss him and to have a good night.

Even though the artist could have snubbed me and not paid any attention to my talk of his former child-star days, he was really sweet about it!

While dining my friend and I saw a woman being escorted by the same security who gave me the side-eye, to the women's restroom. It seemed like she had to many....and guess who it was?


Henson was looking like she definitely had a hard night.

It's okay sweetie....we've all been there!

A few minutes later she comes out of the bathroom and hobbles into the Escalade with Drizzy and they take off.

Could this be a possible love affair in the works?

Who knows?
So, Drizzy...you've redeemed yourself in my book.

I just wish you would have reimbursed me the $50!
Posted by Christine KAURdashian at 12:30 PM No comments: