Sorry fellow bloggers for my absence as of late, but what better day to come back than on the one year anniversary of the King of Pop's death.

Growing up I was a huge Michael Jackson fan. Of course, during this time I was constantly made fun of because it was during the time of the child molestation charges.

That's a coincidence! It just so happened that was the time the Dangerous album had debuted.

Anyway, I would lie in bed at night listening to my walkman (yes, walkman) and memorize all the lyrics and then, later, the dance moves to the music videos.

Sure, my love for MJJ faded every now and then when he hadn't made an album in a while, when he dangled Blanket over the hotel balconey and when he was charged for molesting another child....and I'm sure most of us did.

His personal life was one thing, but his music was definitely another.

It's sad how his death took all of us to realize that.


When Thriller or Beat It play at the club, I can't help but break out in to the dance moves to emulate the zombies and street thugs from the video.

Considering it was just a year ago when I got word of his death, I didn't believe it and I still remember how I felf the moment that news was broken to me.

.....But today, let's take a moment to remember the Michael Jackson we loved to watch!

So, since today's friday....I want you all to put that 9 to 5 up on the shelf...and just enjoy yourself!
Posted by Christine KAURdashian at 4:03 PM No comments:

Like the many ladies out there, I too was excitedly anticipating the Sex & the City sequel. It had been too long since I'd seen my girls: Samantha, Carrie, Charlotte and Miranda.

But after seeing the movie....I could have waited another year.

Well, first off I found it unbelievable that these four women could travel so easily to the Middle East wearing their barely-there couture gowns without someone batting an eyelash!

I can't go on and say the movie and its characters were entirely ignorant to the culture, Miranda was the go-to gal when it came to questions regarding specific Middle Eastern customs. Everytime the ladies had a question or something seemed like it needed explaining, Miranda was there with her handy-dandy tourguide with all the information.

It seemed like Michael Patrick King rushed the movie to appease all SATC fans, when he could have just took his time and really made a great film.

I don't want to give away too much, but there's a certain scene in the movie where if King were being realistic here, one of the characters would have possibly been stoned to death. Honestly.

I'm not trying to say the United Arab Emirates are overly-conservative. I mean it is known for it's modern-spin in a traditional world. King did make it a point to make sure he didn't offend the Muslim community. But the entire movie just seemed very...fantasy-like.

But then again...it is a movie afterall.

Anyway, besides that the film was definitely lacking in substance. Usually Carrie has some profound message, but I didn't see one here.

Not to be too much of a Debbie Downer I did actually like some things in the movie...the good things were definitely the camaraderie among the four women and of course the FABULOUS clothes. The clothes were definitely NOT lacking in fashion or in taste.

I'm going crazy trying to find a mini-turban like Carrie's in the movie.


And you know I had to buy this XOXO white Dolman-sleeved dress to copy Carrie's in the movie's promotional poster! 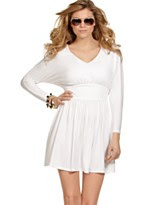 **I just pray I look half as good as SJP!
Posted by Christine KAURdashian at 8:05 PM No comments: