Beyonce's Lemonade is now on iTunes 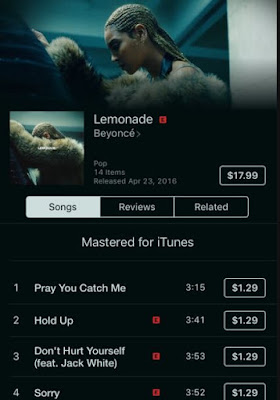 Don't have Tidal? No problem!
Beyonce's latest album Lemonade is now on iTunes.

Did you watch on Saturday?
I did of course, and on Sunday.
Having a full day on Saturday I really didn't enjoy the special presentation. I found it boring, but LOVED the 6 inch featuring the Weeknd, Sorry and Freedom.

When I watched it a second time with more rest and more time, I fell in love with the album.
I loved the concept, the depth of the lyrics and how Beyonce has grown as an artist.
Prior to the 4 album I was a mediocre Bey fan. Her lyrcis were the same line over and over again and the songs were played out on the radio.
When 4 came out I heard more lyrical diversity, catchier songs and a more bad ass attitude.
Then when her self-titled album dropped in 2013....I became a STAN!

Now with Lemonade, even though it took me 2 tries, I understand the concept, I get it...she's a grown woman doing her own thing.

Do I think Jay cheated on her? I mean, this album alludes to it. Then there was elevator-gate back in 2014. Then there are the rumors over whether or not Becky is Rachel Roy. Roy is Dame Dash's ex-wife, Dame was once Jay's Roc-a-Fella partner back in the day.
At the end of the day, it's Jay and Bey and we'll never know the real story unless they tell us.

Now excuse me while I get back into formation and learn these lyrics prior to her show in May.
Posted by Christine KAURdashian at 4:40 AM