Child Services workers are checking out reports of a stun gun in the Jackson family home. Reports say a stun gun was delivered in the mail and Michael's children were exposed to it. An attorney for Katherine Jackson says the children weren't exposed to the weapon. The AP reports that "Attorney Adam Streisand confirmed the investigation Tuesday but said the mail-order stun gun delivered to the home was confiscated before any harm was done." 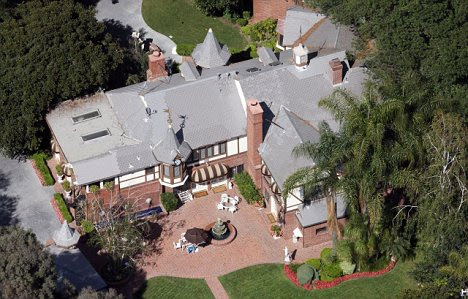 Why the heck would Katherine Jackson need a stun-gun? Well...I guess if Joseph is still living in the house....then maybe.

But wait....Jackson's attorney says the stun-gun wasn't even Katherine's. Supposedly, Jermaine's 13-year old son Jafar (*isn't that a character from Aladdin? Oh, wait....it's Jermaine's son....why am I not surprised by the name....he has a son named Jermajesty after all) ordered the gun and it was sent to the family's Encino compound.


Reports say, " 'Jafar opened the package in his bathroom and tested it on a piece of paper,' Streisand said in a statement. Security and Katherine Jackson heard the sound and confiscated the weapon immediately. Michael Jackson's oldest son, Prince, saw the stun gun after it was taken by security. Blanket Jackson never saw or heard the Taser. Neither did Paris Jackson. Prince saw the Taser in possession of security', said Streisand."

Jafar sounds just as smart as his father. Turns out Jermaine's children also live in the family home. So does EVERYONE live at the compound? Why am I not surprised. I guess that's what happens when the family's meal-ticket is no longer available. I feel sorry for Prince, Paris and Blanket.
Posted by Christine KAURdashian at 5:44 AM