This year I wasn't able to watch the Oscars due to circumstances beyond my control. Well, not really....I just had to be at work at an ungodly hour, which meant my bedtime was very early. However, I knew who I wanted to win and who I didn't, and I'm glad almost everyone I wanted to win did.

For those of you who missed the awards like I did, here is a list of the winners of some of the awards:

I'm very happy Sandra Bullock and Mo'Nique won. I loved both of the movies these women were in. I haven't seen Crazy Heart, nor Inglourious Basterds, so I didn't mind those winners. I loved Up and was very happy it won for best animated feature film. Disney's The Princess and the Frog was alright, but I felt Up blew it out of the water. 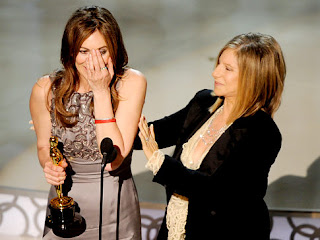 I was very shocked The Hurt Locker beat out Avatar for best picture because that film has created buzz since its opening. I have never even heard of The Hurt Locker prior to the awards (shameful, I know). However, now I really want to see it! I'm also very happy for Kathryn Bigelow for not only being the first woman to win Best Director, but she's James Cameron's ex-wife! Isn't revenge so sweet!?! What ex-wife wouldn't want to beat out her famous-director-ex-husband at  (of all awards shows) THE OSCARS!

Kudos to her and all the winners!
Posted by Christine KAURdashian at 4:40 AM