J.Lo Moves on to A-Rod 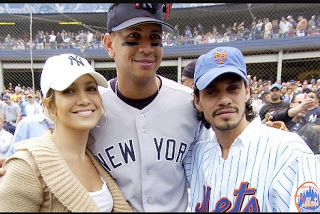 Damn, if that photo above isn't foreshadowing.....I don't know what is.
A match made in aesthetically pleasing and short nickname heaven.
The 47 year old jack-of-all-trades is rumored to be dating the 41 year old former baseball star.
Yeah, we know...he's a little older than who she's been dating lately.
It looks like Drizzy is not in the picture anymore, and was never an official relationship.
According to PEOPLE magazine:

A source confirmed the relationship to PEOPLE, saying the two “have been dating for a few weeks.”
“She seems excited,” a source close to Lopez told PEOPLE. “He has been around her family and she really likes that he is a dad. She is aware, though, that he is a ladies’ man too and is being cautious. For now, it’s just fun. She is single and enjoys dating.”
A rep for Rodriguez had no comment while a rep for Lopez has yet to comment.
Rodriguez, 41, recently ended his relationship with Silicon Valley CEO Anne Wojcicki in February after dating for just under a year. He has previously dated Kate Hudson and Cameron Diaz, among other high profile A-listers.

Welp, even though my dreams of DraLo didn't come true, I support this relationship also.
Posted by Christine KAURdashian at 5:42 AM