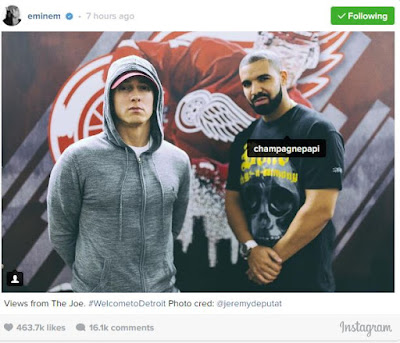 Whattup, Detroit!?
Damn, this one's got to hurt Joe Budden.
Tuesday night Drizzy and Future took their Summer Sixteen tour to Detroit and of course, Drizzy brought out Slim Shady to ignite the crowd.

Drake just brought out Eminem, bowed down to him and called him "the greatest rapper to ever touch a microphone" pic.twitter.com/HSE38oYBOP
— Only Hip Hop Facts (@OnlyHipHopFacts) August 17, 2016

This guest appearance is significant for a number of reasons. Eminem hasn't graced the stage of Joe Louis Arena since Big Sean's show in November for his and  Dej Loaf's performance. Another reason why this is a big deal, is because rumors have been swirling over Drake's alleged beef with Eminem. Drake's been involved in a petty feud with rapper Joe Budden. Budden is a part of Em's Slaughterhouse group and part of the Shady Records. From this, NY DJ Ebro Darden threw joked that Eminem would be making a Drake diss record. Well, the internet went crazy and believed this was true.
I'm glad to see these two are cool.
Posted by Christine KAURdashian at 3:56 AM