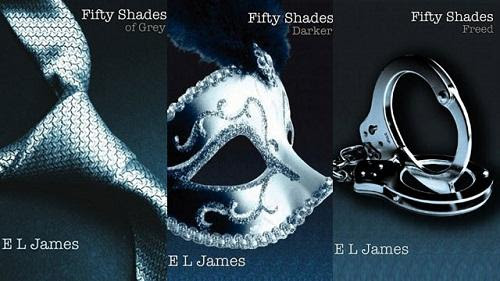 Ladies and Gentlemen, I have something to confess....I have now joined the millions (yes, millions) of women who are obsessed with the fan-fiction book by E.L. James, 'Fifty Shades of Grey'.
I purchased the series after it being highly recommended by a few good friends. One day while perusing the many aisles of Target, I came across the book....then right next to it a box-set of the trilogy. Since your girl likes a deal....I bought the trilogy box set because I thought, I'm probably going to read all three anyway to see what the big deal was about.

22 year old Anastasia Steele falls in love with 27 year old billionaire Christian Grey. As their relationship progresses very fast in a matter of weeks...Ana is introduced to the many shades of Grey!
My friends and I have never been so engrossed with a book before...well, besides The Rock's biography. You become so involved with the main characters: Christian and Ana. Some parts of the book, I've had to stop. Put the book down and sit and absorb the intensity I just read about....and no I'm not talking about just the sex-scenes.

Movie Update according to the New York Observer:

Fifty Shades of Grey, is officially going forward, with the studios involved hiring two producers for the project. While that doesn’t guarantee a movie any time soon, it’s doubtful that Hollywood is just going to sit on this project and let it die a slow death on a backlot when there’s all those box office sales and merchandizing money to be made.
While the Twilight fan fiction was already snatched by Universal and Focus Pictures back in March for $5 million after a huge bidding war, the studios had yet to name anyone attached to the project. Yesterday, Michael De Luca and Dana Brunetti were announced as the film’s producers, according to The Hollywood Reporter. The duo previously had worked together on The Social Network.
There’s still an opening slot for a director and someone to adapt the script, so the Twitter campaign Bret Easton Ellis has been running for the project might not totally be in vain. Though it’s doubtful that either the studios or the producers will let him run with a Lena Dunham/Ian Somerhalder combo for Anastasia and Christian. Or if the movie plans to beat a triple-X rating.

There are rumors on who will/should play the main characters. Here are my choices:

Posted by Christine KAURdashian at 12:55 PM