The Schwarzenegger-Shriver housemaide and homewrecker gave Hello! magazine the first and ONLY exclusive interview with Mildred Baena.

Baena and Arnie's lovechild grace the cover of Hello! with a very awkward pose.
Seriously....is it just me or does homeboy's head look like it's been a victim of the copy +paste? 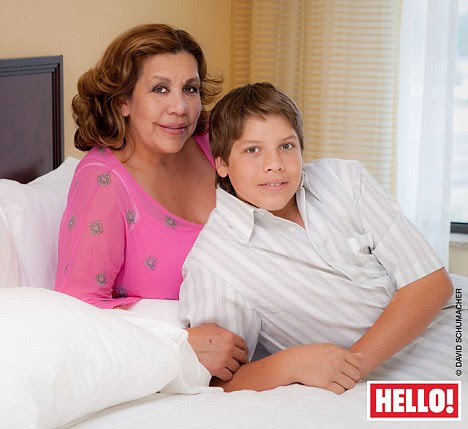 Baena told the British magazine that she finally told her son Joseph the truth about who is real father was his reaction was: Cool!  It seems other household workers have been whispering that Schwazenegger was the baby-daddy for a while and Maria had her suspicions.


Baena says Maria Shriver asked her point-blank one day last year if Schwarzenegger was the father to Joseph."Maria did ask me directly if Joseph was Arnold's son and I just broke down,' Guatemala-born Mildred says. 'I dropped to my knees and I was crying, saying that, yes, he was and I was so sorry. She was so strong. She cried with me and told me to get off my knees. We held each other and I told her it wasn't Arnold's fault, that it takes two. That is what I admired about her, her strength and the way she handled it."

Wow, Maria is a strong woman because I would've probably punched that woman square in the face! Then set Arnie's clothes on fire Angela Bassett-style!

Posted by Christine KAURdashian at 7:08 PM