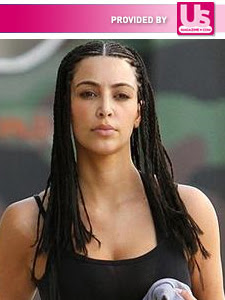 Looks like Kimmy is channeling Bo Derek in the movie 10.
Yes, that movie is before my time, and if it's before your's as well check out the photo below to get my meaning.

Kardashian tweeted: Ok just took a quick nap and woke up with a whole new look. The day her new 'do was revealed. No one really knows what they're for. At first gossip sites speculated her new hair was for the New Years Eve party she was hosting at Tao in Las Vegas. However, the reality-star tweeted this photo of herself with her brother Rob, tweeting that he was her date for NYE. 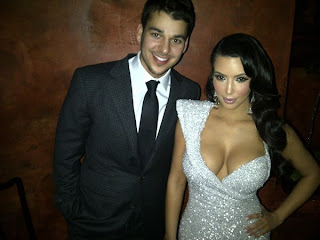 Rumors are swirling that Kim is doing this for her upcoming music video or just to shock all of us. She supposedly played the single last night during her NYE bash at Tao.
I'm more shocked that she's actually putting out a song, than being shocked by the braids.
I wonder if she wore a do-rag to keep those babies from frizzin' up!
Posted by Christine KAURdashian at 6:40 PM