Could the cast of the Jersey Shore's next stop be Miami Beach? 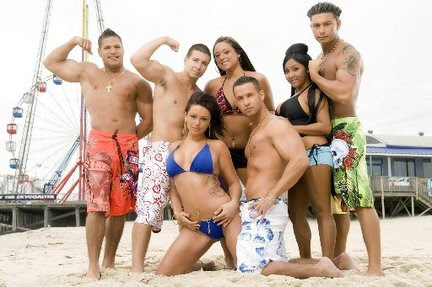 The Miami Herald reports that location scouts have been checking out the area to see if the city can handle, Pauly D., Snookie, J-Wow, The Situation, Sammi-Sweetheart, Ronnie and Vinny.

I really think Ronnie and Vinny need to get on the nickname bandwagon!

And I'm hoping Angelina isn't in this season at all, because she basically was a waste of time. I'm glad I found a cast photo WITHOUT her in it!

It seems like MTV has been a little hush-hush about it, but rumors are swirling that the network may forgo having the cast stay in a beach house and just check-in to a hotel.

I'm so jealous! How fabulous would that be?

Though I did love watching the Jersey Shore and I have a liking for the Jersey-style accent, I'm a little leary about a second season. Of course, the promotions will be promising us more fist-pumping, fighting and drama.

But, could season 2 really compete with season 1?

I wouldn't mind seeing another cast member getting punched in the face!

I just hope the next season's drama won't be so over -the-top and  fake that I wouldn't want to watch anymore.

I'm crossing my fingers!
Posted by Christine KAURdashian at 5:11 PM