Mr. Woods...FINALLY breaks his silence in a media briefing today. Stations around the country took Tiger's speech LIVE today. Something like that usually happens for the President, but not in cases like the Tiger Woods Infidelity Drama.

It didn't really seem like a sincere apology because it seemed like he kept looking down at his speech every five seconds. 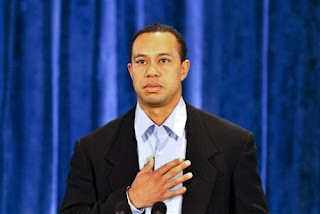 
Among the many things Woods says in his"press conference", Woods made it a point in the very beginning to express what this ordeal has done with his family.

"I know people want to find out how I could be so selfish and so foolish. People want to know how I could have done these things to my wife Elin and to my children. And while I have always tried to be a private person, there are some things I want to say. Elin and I have started the process of discussing the damage caused by my behavior. As Elin pointed out to me, my real apology to her will not come in the form of words. It will come from my behavior over time. We have a lot to discuss however, what we say to each other will remain between the two of us."

"I ran straight through the boundaries that a married couple should live by. I thought I could get away with whatever I wanted to. I felt that I had worked hard my entire life and deserved to enjoy all of the temptations around me. I felt I was entitled. Thanks to money and fame, I didn't have to go far to find them."

He then goes on to say how Buddhism is helping him get through this tough time and how he doesn't know when his return from golf may be.

This comes days after one of Tiger's mistresses says she got pregnant TWICE with Tiger.

Who would have thought, clean-cut Tiger would have been such a womanizer?

I guess we'll have to sit back and watch what happens next.
Posted by Christine KAURdashian at 4:38 PM