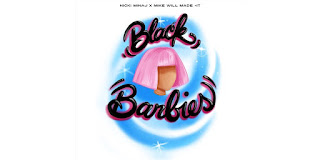 
Nicki Minaj fans are freaking out and rightfully so.
We haven't heard any new music from her in a minute.
About two weeks ago, the Pink Friday rapper released a freestyle via SoundCloud rapping over Rae Sremmurd's Black Beatles beat.
IT.WAS.FIRE.
Now fast-forward to today, and Miss Minaj released a mixed and mastered version to Tidal and it can now be purchased on iTunes as well.
The freestyle takes shots at President-elect Donald Trump with the line : “Island girl, Donald Trump want me go home/Still pull up with my wrist looking like a snow-cone.”
This isn't the first time Nicki colloborated with Rae and it was a hot track.
Back in 2014 the three of them collaborated on a remix for No Flex Zone.

Posted by Christine KAURdashian at 6:21 AM