Just looking for a man like T.I. who will give me "Whatever I Like". lol
Posted by Christine KAURdashian at 9:58 AM No comments:

Welp, here's another one.
Didn't these two JUST get married?
Yup, a year ago and now it's over.

Amber filed for divorce on September 23rd. The couple began dating in 2011, and got married on July 8, 2013.
The timing of the split is surprising given that just two weeks ago, Amber took to Instagram to wish Wiz a happy birthday with a romantic message:
Happy 27th Birthday @mistercap I'll love u forever.... Hope this year is an amazing one for u sweetheart ❤️

While Wiz on the other hand, gave no hints on their sudden split on his social media accounts, when he tweeted about "positive energy" Tuesday. Posted by Christine KAURdashian at 4:45 PM No comments:

Throwback to when this song came out and I was excited that they acknowledged girls who were "5'5" with brown eyes."
Posted by Christine KAURdashian at 9:50 AM No comments:

Lauren Conrad's Wedding to William Tell in US Weekly


Basically America's best girlfriend got married over the weekend and I couldn't be happier.
I mean, I've been following her since her Laguna Beach days.

On the cover of this week's US Weekly, Conrad shows off her Badgley Mischka gown.

And of course Conrad- the Paper Crown and LC Lauren Conrad - designer was hands-on for the entire process. "She was involved in the process the whole way," Badgley told the magazine. "She had a really clear notion," he added. "And she stuck to her guns." She would fly to NYC every few months to work with the designers and even took the reigns with alterations.


At one of the meetings at her condo,  she decided to ditch the sleeves on her dress. "I felt like I couldn't pull them off," she explains in the issue. "I don't have super long arms." She joked that when the Badgley Mischka tailor was hesitant she threatened to take matters into her own hands. "I was like, 'Sir, if you don't cut them off, I'm going to use my kitchen scissors and cut them.'" Not to worry, it didn't come down to that!
In the end, Conrad walked down the aisle in a two-tone Chanitlly and Alençon lace dress with crystals, pearls and baby glass beads. With a 10 ft. train!

According to Us, Conrad summed up her gown with three words: Glamorous. Classic. Simple.

I expect nothing less from good ol' LC.
Posted by Christine KAURdashian at 5:07 PM No comments:

In honor of the Drake Vs. Lil Wayne concert I'm seeing tomorrow night......
I pretend Drizzy sings this to me.
Posted by Christine KAURdashian at 9:11 AM No comments:

Email ThisBlogThis!Share to TwitterShare to FacebookShare to Pinterest
Labels: Aubrey Drake Graham, best i ever had, Drake, drakevslilwayne, Throwback Monday


Just last week, CBS and the NFL announced that Thursday Night Football would be debuting a new theme song by Rihanna.
However, all that changed after new security footage emerged showing former Baltimore Raven, Ray Rice, beating his wife Janay in an Atlantic City elevator. Since the release of that video, Rice has been indefinitely suspended from the NFL and cut from the Ravens.

Since all of this is going on, CBS decided to axe Rihanna's pre-recorded performance of Run this Town ft. Jay Z. The network also took out a comedy sketch that was set to be part of the show opener.
Instead, CBS This Morning anchor Norah O'Donnell will host a pre-game show newscast.

"It's important to realize we are not overacting to this story but it is as big a story as has faced the NFL," CBS Sports chairman Sean McManus told SI.com. "We thought journalistically and from a tone standpoint, we needed to have the appropriate tone and coverage. A lot of the production elements we wanted in the show are being eliminated because of time or tone."

Rihanna is a victim of domestic violence and the Baltimore Ravens play the Pittsburgh Steelers tonight.

Posted by Christine KAURdashian at 4:25 PM No comments:

Swipe Right for Britney on Tinder

Fellas, Britney is back on the market!
After breaking up with her loser boyfriend David Lucado, Britney's been open about wanting to find her next man.
Even at one of her Vegas shows, Spears says “So I know you know my boyfriend cheated on me."

So, because Jimmy Fallon is Jimmy Fallon....he decided to put good ol' Brit-Brit on Tinder because that's what you do when you've just broken up with a longtime love. 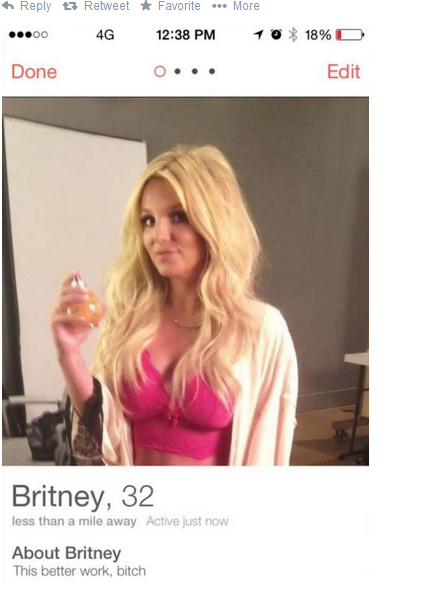 It's nice to see Britney is just like one of us!
But of course, she'll find someone super fast because she's Britney.
Posted by Christine KAURdashian at 1:26 PM No comments:

Man, when Nelly was on top...I miss those days.

Posted by Christine KAURdashian at 1:33 PM No comments: Posted by Christine KAURdashian at 7:11 PM No comments:

If you haven't already heard, celebrities like Jennifer Lawrence, Ariana Grande and Kate Upton are among the many whose private nude photos were leaked online by 4Chan.
I'm not going to provide a link to the site, because I personally do not agree with giving them free publicity.
4Chan is a site many of you have never heard of.  According to the Washington Post, 4Chan has been described as the “darkest corners of the Web” by a New York Times writer and the “ninth circle of Hell.”
On Sunday evening, the website dumped numerous nude photos of celebrities allegedly from their phones. Personal photos and videos that were thought to have been deleted apparently weren't completely as these hackers got their hands on them.

Jennifer Lawrence's camp responded with: “This is a flagrant violation of privacy,” they said in an email. “The authorities have been contacted and will prosecute anyone who posts the stolen photos of Jennifer Lawrence.”

Kate Upton's lawyer says, “This is obviously an outrageous violation of our client Kate Upton’s privacy,” said Upton’s lawyer Lawrence Shire in an email to BuzzFeed. “We intend to pursue anyone disseminating or duplicating these illegally obtained images to the fullest extent possible.”


These so called nudes of me are FAKE people. Let me nip this in the bud right now. *pun intended*
— Victoria Justice (@VictoriaJustice) August 31, 2014


Remember, when you look at these pictures you are violating these women again and again. It's not okay.
— Lena Dunham (@lenadunham) September 1, 2014

According to Ariana Grande and Victoria Justice, these photos are fake.


I personally agree with Lena Dunham:

Posted by Christine KAURdashian at 7:00 PM No comments:

Brangelina Finally Wed and it's a Family Affair


Brad Pitt and Angelina Jolie have finally tied the knot. Of course, in true Brangelina fashion we knew AFTER the fact. The couple tied the knot in the chapel of Château Miraval, the family's estate in the French village of Correns.
Photos of the big day are published in the latest issue of People and it turns out it was very much a family affair.
While only 20 friends and family were in attendance to the August 23rd French nuptials, the couple's six children played a very major role.

According to the Huffington Post:
"Eldest sons Maddox (13) and Pax (11) walked their mother down the aisle, while Zahara (9) and Vivienne (6) threw flower petals, and Shiloh (8) and Knox (6) served as ring bearers. The kids allegedly helped write the vows and Pax baked the cake!

Meanwhile the children also literally put their mark on their mother's gown. Never one to conform to expectations, Jolie donned an ivory satin Atelier Versace gown adorned with dozens of her children's designs and drawing sewn into the back of the gown and veil, by Luigi Massi, the master tailor at Atelier Versace.

Brad and Angie also honored Jolie's mother, the late Marcheline Bertrand, by engraving a dedication inside the chapel in their home. Bertrand died in 2007 after a long battle with ovarian cancer. Jolie along with her brother James wore jewelry of their mother's. Angelina wore a flower ring and James wore an angel pin. Angelina also wore a golden heart locket with her mother's photo inside.
Posted by Christine KAURdashian at 6:30 PM No comments:

I'm working on Labor Day....ironic isn't it?
I'd rather be drinking mimosas and dancing to Bartender.
Posted by Christine KAURdashian at 8:23 AM No comments: