Monster by Kanye West | Grooming by Ibn Jasper from FRANK REPS on Vimeo.
Since Halloween is on Saturday...
Posted by Christine KAURdashian at 8:31 PM No comments: 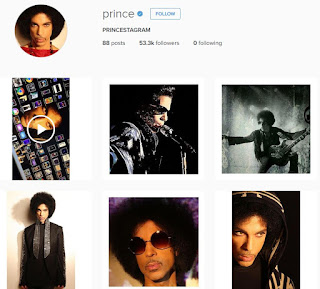 Prince is on Instagram!
Three days ago Prince announced his arrival on IG and his account is named Princestagram...because why wouldn't it be?
He's already posted 88 pics.

Posted by Christine KAURdashian at 7:34 AM No comments: 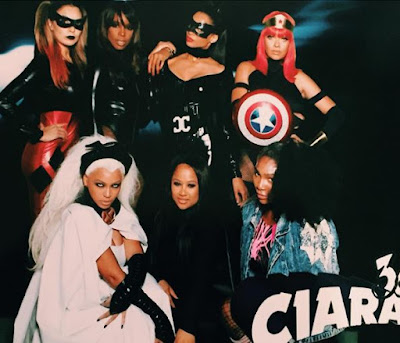 Who wouldn't die to be at this birthday party!?
These are SUPER SQUAD goals.
Look at Bey giving us face as Storm and even Mama Tina is in the mix.
The squad got together to surprise and celebrate Miss Ciara turning the big 3-0.
With  Olivier Rousteing, Ciara, Miguel and others are turning the Dirty 30 these past few weeks...I don't feel so bad celebrating mine.

I met Beyoncé tonight and she couldn't have been more sweet. And shares my love of costumes. @Beyonce

Adele Finally Has New Music and Video to Accompany "Hello"

ABOUT DAMN TIME!
Adele taking it back for us by writing a song about a breakup and the aftermath.
YASSS!!!
Posted by Christine KAURdashian at 9:04 AM No comments:

Confessions of a Beauty Product Junkie: The ScrewUp

October is Domestic Violence Awareness month. To help put an end to domestic abuse, Michelle Winder developed this great hair accessory to literally screw your hair up out of your face.
Check it out here.
Posted by Christine KAURdashian at 7:19 AM No comments:

Since Lamar Odom was found unconscious in a Nevada brothel last week, Khloe has been by his side.
Since then, the Kardashian-Jenner family has shown nonstop support to the former-Laker.
Khloe took to her website earlier to express her gratitude for everyone's prayers and well-wishes.


It seems it took Lamar to hit rock-bottom for these two to get back together because they've since pulled their divorce papers from the LA County Court. Right now their divorce is on pause.

For those of us who've watched Khloe take on the Hamptons and keep up with her family, we know despite her relationships with French Montana and James Hardin...Lamar was always her person.
Sidenote: James Hardin...I'm guessing you two are over?

Here's hoping these two work it out.
Posted by Christine KAURdashian at 3:57 AM No comments:

Yeezy has a SoundCloud now, and there's new music on it. Some found this out via Travis Scott's instagram post.
The two singles are When I See It and Say You Will.
Say You Will is a remixed version of his 808s & Heartbreak single. Recently he brought it back for his two-night performance at the Hollywood Bowl.
Reports say "the remix features contributions from Caroline Shaw, the young composer who is a recent Pulitzer Prize winner."
I hope this means the highly anticipated SWISH album is coming out soon.
Posted by Christine KAURdashian at 5:57 AM No comments:

About damn time.
Drizzy has debuted via Apple Music the video for his hit sing Hotline Bling.
Bonus: We get to see him dance.
The video debuted Monday night and the internet is loving it.
This reminds me of those old iPad commercials from the early 00s.
What do you think?

So Janet has been making the rounds lately promoting her comeback.
To honor said comeback, here's an oldie but goodie.
The video with one of the best solo-choreographed dances of all time.
Posted by Christine KAURdashian at 8:22 PM No comments:

Lamar Odom Out of Coma

After being found unconscious from an apparent overdose last week, former basketball star Lamar Odom is out of a coma and apparently talking and "smiling".

The Karashian-Jenner clan took to social media on Friday to express their happiness that prayers worked and Lamar was basically improving.

Kim Instagramed this sweet photo sharing that she made Lamar smile was in the hospital. She also allegedly cancelled her Troop Beverly Hills themed baby shower, which was supposed to happen over the weekend to be by Khloe's side.
Random: but why'd she post a pic from her 2nd wedding?There were no other cute pics?

I have faith in you. I believe in the power of prayer and positive energy! Thank you all for your prayers! Lammy- I'm so happy Kendall & I could make you smile today! God is good!
A photo posted by Kim Kardashian West (@kimkardashian) on Oct 17, 2015 at 9:44pm PDT


Regardless, it's great that Lamar is improving.
According to E!:
Since Odom emerged from the coma, he has:
—Spoken briefly to Khloé Kardashian, saying, "Hey baby" and "Good morning"
—Begun to communicate using hand signals
—Been able to breathe on his own, without a ventilator. He is also using a non rebreather mask that is pumping oxygen and doctors recently decreased the amount needed. The next step is to wean him off it entirely, which depends on how strong his body is
—Passed a swallow test, a promising sign of neurological function
—Left his hospital bed: He was moved, with assistance into a chair
Due to kidney failure, Odom remains on dialysis and doctors are still running tests to determine the extent of possible brain damage or other long-term effects from his overdose.

Lamar's children, Destiny and Lamar Jr. are in Nevada staying in the area to be with their dad. Their mother Liza Morales also came to visit.
Besides family, NBA great Kobe Bryant has been very supportive of Lamar and knocking haters who think different.

Posted by Christine KAURdashian at 4:38 AM No comments:

My heart just breaks for all of these guys. Interesting enough, reports have surfaced that Scott Disick is now back in rehab during this time. I wonder if this was a wake-up call for Scott? No better time like the present to get the help you need. Speaking of Kardashian exes, Kris Humphries took to twitter asking his followers to send prayers to Lamar.

Everyone please pray for @RealLamarOdom to make it through this. Great player, even better person!
— Kris Humphries (@KrisHumphries) October 14, 2015

Posted by Christine KAURdashian at 4:30 AM No comments:


Poor Khloe.
Former basketball champ Lamar Odom is fighting to stay alive in a Nevada hospital after being found unconscious Tuesday inside a brothel.
At around 3:15pm, employees at the Love Ranch brothel in Crystal, Nevada found Odom unconscious. Emergency crews couldn't airlift him due to this 6'10" frame, so they had to rush him to the hospital by ambulance.
Dennis Hof, the owner of the facility, says staff picked up Odom from a home on Saturday. He wanted to "have fun and let loose". Hof insists Odom was fine. He was sleeping everynight and enjoying himself.
However, all that ended when two girls who went to check on him on Tuesday found him unconscious. 911 recommended they turn him to his side, and there he was vomitting.

Reports state that Lam-Lam had taken an herbal viagra while staying there while others claim he also had cocaine and cognac in his system.

What we know for sure is that once Khloe heard the news, she rushed to NV along with her mom and sister, Kim. Other reports say Lamar is on life support and Khloe has flown out his two kids to see him.

Unfortunately, Odom has had his fair share of tough times. His mother died of cancer when he was 12 years old and he was raised by his grandmother. His father is a known drug addict always asking for a handout. His infant son died of SIDS back in 2006, and of course we know he had his own addiction issues.
Odom , a former Laker, won two NBA titles with the team. However, his basketball career ended back in 2013.

Odom and Kardashian are still technically married, their divorce hasn't been finalized. Fans of KUWTK know how much Lamar means to Khloe and can only imagine what she's going through to see the love of her life do this to himself.
Since Lamar isn't conscious, Khloe is reportedly making the necessary medical decisions for him. Rumors are swirling that KUWTK camera crews are at the hospital, but have since been proven false since the show is on hiatus.
The other day Kylie abruptly left her livestream after hearing the news and Kendall sent out a cryptic tweet.

Here's hoping Lamar will pull through.
Sending positive thoughts to the Odom and Kardashian family.
Posted by Christine KAURdashian at 5:45 PM No comments:

John and I are so happy to announce that we are pregnant :) As many of you know, we've been trying to have a baby for a while now. It hasn't been easy, but we kept trying because we can't wait to bring our first child into the world and grow our family. We're so excited that it's finally happening. Thank you for all your love and well wishes. I look forward to all the belly touching! Xx
A photo posted by chrissy teigen (@chrissyteigen) on Oct 12, 2015 at 4:55pm PDT

The couple fostering #relationshipgoals hashtags around the country and expecting and I couldn't be happier. Chrissy Teigen went to instagram on Monday to announce she and Legend are expecting their first child together.
Recently Teigen made headlines when on her show, the FabLife, she discussed how difficult it has been for the couple to get pregnant.
Congrats you guys!
That's going to be one gorg baby!

Totally forgot about this gem.
Posted by Christine KAURdashian at 9:24 AM No comments:

Email ThisBlogThis!Share to TwitterShare to FacebookShare to Pinterest
Labels: amg, can you werk with that, dj quick, the fixxers, Throwback Monday


This song reminds me of my early 20's when I wanted to be on a 24 hour champagne diet.
Posted by Christine KAURdashian at 9:41 AM No comments:

Shopaholism: ShopBop and Wildfox Collaborate for Jem and the Holograms Collection 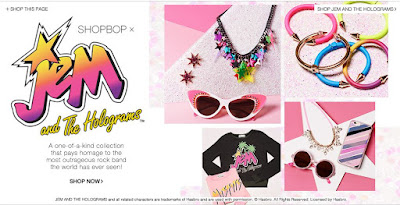 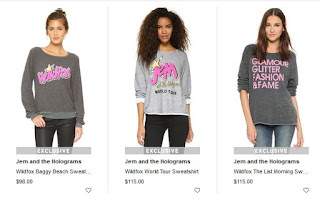 Guys, I'm freaking out!
Via Instagram, I found out Wildfox Couture has teamed up with Shopbop for a one of a kind Jem and the Holograms collection.
4 year old Christine is literally dying. 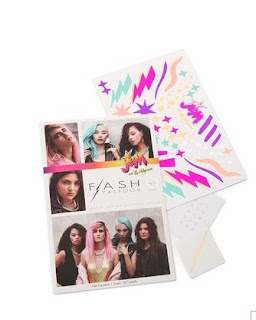 Reeling myself from the disappointment that is the new Jem and the Holograms movie (even my 27 year old bro thinks it's bad...he's mad it isn't a cartoon)....Wildfox and Shopbop's collabo has me SO excited.
My birthday is coming up, so I have an even better reason to splurge.
Too bad they don't have Jem's magical earrings. Now those I'd pay top dollar for!
Posted by Christine KAURdashian at 4:14 AM No comments: