You Never Know What Life is Going to Throw at You

Since 2011 kind of sucked for me, I decided to unofficially make December my bitch, because....well, why wouldn't I? Also, because I felt it was a good lesson on how to create your own happiness instead of relying on outside factors.

So, I tried....but after a few days into the month I began to regret my decision since the month was basically making me its bitch instead of the other way around...until one day changed all of that. 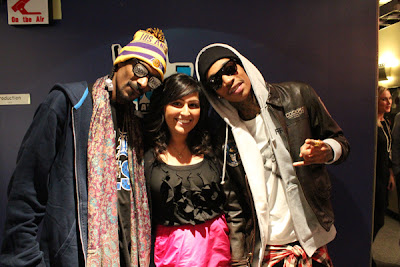 I was just minding my own business at work, when I heard Snoop Dogg and Wiz Khalifa were in my building visiting the radio station a couple of floors beneath me. Determined to go forward on my goal, I grabbed my coworkers and we met the hip-hop stars. I couldn't believe it! I was just listening to Young and Wild and Free on my way into work that morning!

I didn't know what to say to the pair when I met them so I stuck out my hand and introduced myself. I shook hands with Wiz, and then went to shake hands with Snoop when all of the sudden he says Gimme some love! I wanted to die! So, I gave him a hug....then Wiz says....Well, I was gonna give you some love too, but oh well. I wanted to die again! I quickly  gave Wiz a hug as well, snapped my picture and thanked them.....they both called me sweetheart!

Does that not sound like the best day ever!?!


It just goes to show you, you never know what the day can bring!
Posted by Christine KAURdashian at 7:11 PM