Early Wednesday morning, everyone was glued to Instagram to, once again, see Rob Kardashian put his baby-mama, Blac Chyna on blast.
This time, it took a very dramatic turn.
Kardashian posted naked pictures of Chyna he obtained either from her or from other sources claiming she had been cheating on him with multiple guys. Kardashian says Chyna slept with two other guys within days of sleeping with him in the bed their daughter Dream sleeps.
Kardashian claims that Chyna's post-baby body isn't from flat tummy teas or waist training, it's from surgery that he paid for as well as thousands of dollars in jewelry he just purchased for her.

Rob Kardashian spilling the tea this AM. #Repost @robkardashian (@get_repost) ・・・ Everyone wonders how Chyna lost all that weight after the baby and she lies to everyone but no I'm such a great Husband that on our anniversary I paid 100K to do this surgery to get all everything fixed as much as they could. And then guess what she did after she was all healed when I was by her side the entire time. She left me and my baby which she had out of spite to get back at her other baby daddy. I can't believe u would disrespect me like this
A post shared by Christine KAURdashian (@christinekaurdashian) on Jul 5, 2017 at 8:22am PDT


More from Rob: #Repost @robkardashian ・・・ So this is the dude she sent me the video of them fucking @mechiesocrazy lol so she fucked me then @ferraritru3 then this dude in 3 days. With my daughter and her son in the house in my bed haha and my paid house. Damn this woman is crazy and thank God i fucked her without a condom but damn I'm scared but I promise imma get checked and do a full panel this week ! I'm praying imma be clean but shit Chyna. So now the total is 8 dudes in less than a month come on man. This is wild. Omg I'm actually laughing
A post shared by Christine KAURdashian (@christinekaurdashian) on Jul 5, 2017 at 9:41am PDT 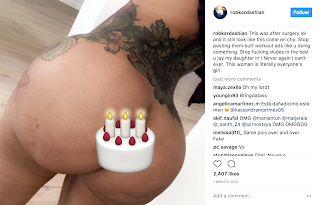 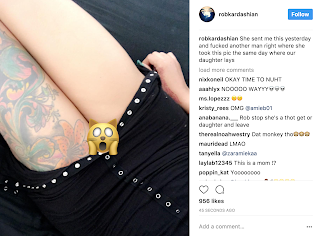 To prove his argument, he posted a video of Chyna on her way into the operating room and then posted post-op photos, where Chyna is naked.
He also claims Chyna has a drug and alcohol problem and will not be seeing their daughter.
During Kardashian's rant, Chyna took to Snapchat claiming Rob beat her and threatened. 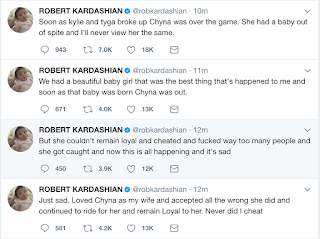 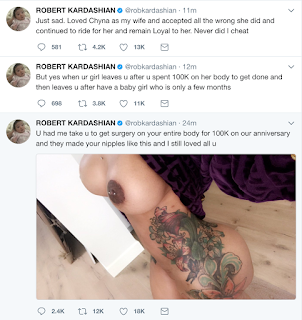 Then there's a Craigslist ad moving around the interwebs allegedly from Kardashian and he's trying to sell the bed Chyna committed her sins on.

Rob Kardashian is on Craigslist selling the bed he used to share with Blac Chyna. pic.twitter.com/DBlxLpNLHS
— Funny Or Die (@funnyordie) July 5, 2017

While all of us were eating our popcorn watching this train wreck, celebrities weighed in with their opinion on the matter too.
Uncle Snoop and 50 Cent posted responses on Instagram.

T.I. tried to help Rob out by telling him to chill out, only to be called out himself.


This isn't the first time Kardashian went on social media to blast Chyna. Late last year he posted a video claiming Chyna took baby Dream with her and left him around the holidays. Then years before, he tweeted that his ex-Rita Ora cheated on him with 20 guys when they were together.
Many reports are saying Kardashian could be in some serious legal trouble seeing as he posted the nude photos of Chyna violate California's revenge porn law.
Regardless, the real issue at hand is how dysfunctional and toxic Rob and Chyna's relationship is. All of us saw that having a child with Chyna, while her baby-daddy Tyga was dating Kardashian's little sis Kylie wasn't the smartest move. We've watched this relationship disintegrate for over a year and we know all of this because Kardashian is constantly posting about it.
Rob cries wolf on Instagram, then days later we're told he's doing fine...just going through some stuff.
We all know Chyna has always been Chyna, but Rob needs to seriously grow up. Posting nudes your ex sent you is the worst thing you can do..it's f&#kboy behavior.
Yes, Chyna shouldn't have cheated, but Rob isn't looking like a Saint right now either.
Posted by Christine KAURdashian at 5:32 AM