Nicki Minaj Pays for College for Fans Via Social Media

It all started around Saturday at midnight when Nicki was promoting her contest to bring a fan to the Billboard Music Awards, when one fan boldly asked for Minaj to just pay her tuition instead.
From that, Nicki was playing Oprah with you get tuition paid! You get your textbooks paid for!

The catch? Show the Young Money songstress your report card of straight A's and show that your school can back it up...and she'll pay for it!
She even offered to pay for an Audio Visual student's camera in Colombia!


Nicki throwing out money for the college education of her fans comes days after Queen Beyonce announced her "Formation Scholars" award to celebrate the year anniversary of her critically acclaimed film and album Lemonade. According to her website, "Four scholarships will be awarded, one per college, to female incoming, current or graduate students pursuing studies in creative arts, music, literature or African-American studies. The schools selected for participation are Berklee College of Music, Howard University, Parsons School of Design and Spelman College. All details and application deadlines are available directly from the colleges." 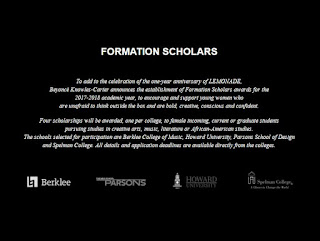 Kudos to these two strong women for giving back and lifting up their community.

Posted by Christine KAURdashian at 4:52 AM