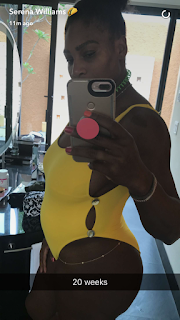 Tennis superstar, Serena Williams dropped the news via Snapchat, but then quickly deleted it.....but that didn't work with the internet!
The 35 year old and her fiancee, Reddit co-founder Alexis Ohanian, confirm they are welcoming their first child this Fall.
Why does that bangin' body STILL look good 20 weeks pregnant?!
Seriously, she looks better than I do and I'M NOT PREGGO!
So let's do the math....that means she won the Australian Open while she was in the first trimester of her pregnancy! Remember, that's the one where she won her record-breaking 23rd grand slam.
It's also cute that both she and Beyonce are pregnant at the same time!

Now more importantly...has anyone checked on Drake?
Is he doing okay with the news?
Posted by Christine KAURdashian at 3:59 AM