Recounting his experience on Twitter and on Instagram, rapper Wyclef Jean of Fugees fame was mistakenly arrested by LAPD.
At a little before 5am, Jean took to Instagram showing video of his arrest saying:
L.A., right now, coming from the studio,” Mr. Jean said. “Y’all see the police have handcuffs on me. They just took off my Haitian bandanna. That’s what’s going on right now with Wyclef in L.A. right now. The L.A.P.D. have me in cuffs for absolutely nothing.


He then took to social media to explain his side of the story. 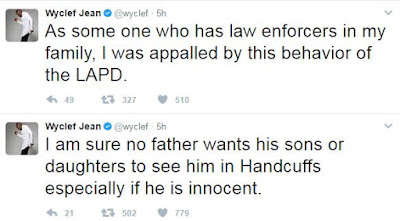 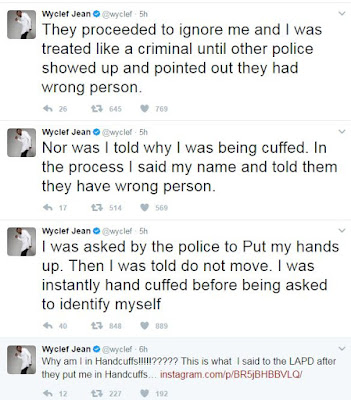 Meanwhile, the New York Times spoke to the Sgt,. Duncan with the Los Angeles County Sheriff’s Department in West Hollywood and they confirmed that:
" Mr. Jean had been briefly detained. The episode started just after 1 a.m. Pacific time, when deputies were investigating a report that a man and a woman had been robbed at gunpoint and beaten at a Sunset Boulevard intersection. Sgt. Duncan said in a telephone interview that the suspect was described as a black man with a dark hoodie who fled in a gold or tan Toyota. At about 1:25 a.m., deputies pulled over a vehicle matching that description driven by a woman with a male passenger. When the man, who later turned out to be Mr. Jean, was seen wearing a red bandanna, the victims, contacted by radio, said that the suspect had also been wearing one, Sgt. Duncan said.
Mr. Jean and the woman were told to get out of the car, and Mr. Jean was handcuffed and detained, Sgt. Duncan said. They were released when the victims said there was no female in the getaway car, and the three deputies and the sergeant at the location with Mr. Jean were also informed that the real suspect had been arrested elsewhere.
Sgt. Duncan said the entire episode — from when Mr. Jean was pulled over until he was allowed to leave — lasted six minutes. Mr. Jean was given a business card and told that he could go to the sheriff’s station and speak to officials there about what had happened."

The woman in the car ended up being Jean's manager.


When asked why law enforcement didn't listen
Posted by Christine KAURdashian at 11:28 AM