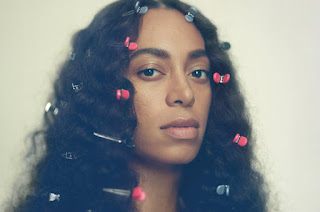 These Knowles sisters are something else!
First Beyonce gives us life with Lemonade, and then Solange drops her a surprise album of her own and it's now at number one on the Billboard 200. A Seat at the Table beat out Bon Iver's much anticipated album, 22, A Million.
Solange Knowles has long been in the shadow of big sister, Beyonce, but with this new album of hers she's creating a lane for herself this time.
Elevator jokes aside, Solange's credit for her vocals, art, vision and lyrics has long been overdue.


This album took Solange 4 years to create and the songs everyone seems to like are Cranes in the Sky, Don't Touch my Hair, Weary and Mad. Cranes in the Sky was actually written 8 years ago when Raphael Saadiq handed her a CD with some beats and she wrote the track in her hotel room that night.

The album has Lil Wayne, Kelela, Q-Tip, The-Dream, Dev Hynes, Master P and Kelly Rowland. The album gives me deep soul vibes, but Knowles also sprinkles in some spoken word especially around race. She has a snippet of her mom, Tina Knowles-Lawson, describing how she's always loved being black and one from her father, Matthew Knowles, on how mad he was being roughed up by the cops and the Klu Klux Klan as a young man in the South.

Solange even released a behind-the-scenes documentary on how A Seat at the Table came to fruition.

Not only are all of us regular folk in love with the album, so are celebrities.
Missy Elliot, Calvin Harris, Lena Dunham, Rashida Jones and Joe Budden are among the many who are loving this album.

Posted by Christine KAURdashian at 5:39 AM