Beyonce Keeps Singing Even with an Ear Injury 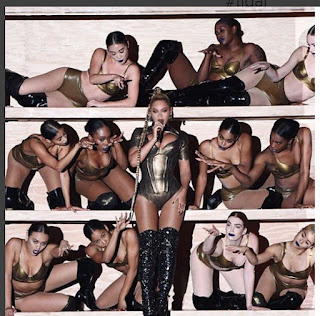 What a professional!
At the Tidal X: 1015 concert in Brooklyn on Saturday night, Queen Bey gave a phenomenal performance with a mix of 6 Inch and Haunted.
While singing her heart out at the Barclays Center, her superhuman braid ripped out one of her earrings causing her ear to bleed.
Yes, you read that right.
Beyonce was singing, while blood was dripping down her ear.
She just gently wiped it away without missing a beat.
She even came back to perform All Night without even a Band-Aid!

Beyoncé continuing to perform after her earring ripped from her ear and started bleeding. A true performer. pic.twitter.com/FvyICuxVAb
— ㅤ (@TheDailyBey) October 16, 2016


The Tidal X: 1015 concert benefits the Robin Hood Foundation, which is an organization to raise money to end poverty in NYC.

While Bey was killing it onstage, she didn't let the audience forget that they had to vote on November 8th.

"I know this year has been extremely hard for us," she told the crowd. "I know sometimes I've felt powerless and frustrated. There's been so much negativity and nonsense. It can be easy to feel hopeless and want to just block the world out, but doing nothing right now is not an option, y'all. I know it seems like things are bad, but if you think they can't get worse, just ask your grandparents."
"Remember, Barack Obama is our president," Queen Bey continued. "You made that happen. Young people made that happen. We are not helpless. The fire is still burning. Please go out and vote this November. So many people have died and sacrificed so much for us to have our voice. We have to use it. Get in formation. Use our voices to do something great for our children."
Posted by Christine KAURdashian at 10:59 AM