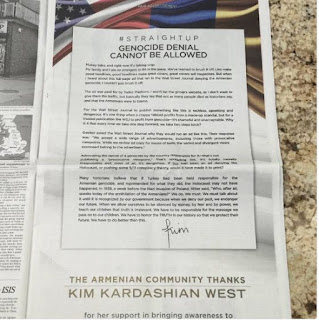 Kim Kardashian West is proving she's more than just a pretty face and nipples .
The reality star wrote a blog entry on her website back in April and it was re-printed as a part of a full ad in Friday's New York Times. The ad was paid for by the Armenian Educational Foundation  to address the Armenian Genocide after the Wall Street Journal had an ad back in April that denied it. With the headline #STRAIGHTUP, Kim talks about how the Wall Street Journal's ad was paid for by the Turkic Platform, a pro-Turkey group,  and that it denies the genocide ever took place and blames the Armenians for the killings.

#STRAIGHTUP
Money talks, and right now it's talking shit.
My family and I are no strangers to BS in the press. We've learned to brush it off. Lies make good headlines, good headlines make great covers, great covers sell magazines. But when I heard about this full-page ad that ran in the Wall Street Journal denying the Armenian genocide, I couldn't just brush it off.
The ad was paid for by Turkic Platform. I won't list the group's website, as I don't want to give them the traffic, but basically they say that not as many people died as historians say, and that the Armenians were to blame.
For the Wall Street Journal to publish something like this is reckless, upsetting and dangerous. It's one thing when a shitty tabloid profits from a made-up scandal, but for a trusted publication like WSJ to profit from genocide—it's shameful and unacceptable. Why is it that every time we take one step forward, we take two steps back?
Gawker asked the Wall Street Journal why they would run an ad like this. Their response was: "We accept a wide range of advertisements, including those with provocative viewpoints. While we review ad copy for issues of taste, the varied and divergent views expressed belong to the advertisers."
Advocating the denial of a genocide by the country responsible for it—that's not publishing a "provocative viewpoint," that's spreading lies. It's totally morally irresponsible and, most of all, it's dangerous. If this had been an ad denying the Holocaust, or pushing some 9/11 conspiracy theory, would it have made it to print?

Many historians believe that if Turkey had been held responsible for the Armenian genocide, and reprimanded for what they did, the Holocaust may not have happened. In 1939, a week before the Nazi invasion of Poland, Hitler said, "Who, after all, speaks today of the annihilation of the Armenians?" We do. We must. We must talk about it until it is recognized by our government because when we deny our past, we endanger our future. When we allow ourselves to be silenced by money, by fear and by power, we teach our children that truth is irrelevant. We have to be responsible for the message we pass on to our children. We have to honor the TRUTH in our history so that we protect their future. We have to do better than this.


Here's the ad in the Wall Street Journal which was in their April 20th paper:

The ad contains a link to a website called  Fact Check Armenia which basically denies that the Armenian genocide ever took place.
If you're unfamiliar with the Armenian Genocide, here's a brief description from History.com

In 1915, leaders of the Turkish government set in motion a plan to expel and massacre Armenians living in the Ottoman Empire. Though reports vary, most sources agree that there were about 2 million Armenians in the Ottoman Empire at the time of the massacre. By the early 1920s, when the massacres and deportations finally ended, some 1.5 million of Turkey’s Armenians were dead, with many more forcibly removed from the country. Today, most historians call this event a genocide–a premeditated and systematic campaign to exterminate an entire people. However, the Turkish government does not acknowledge the enormity or scope of these events. Despite pressure from Armenians and social justice advocates throughout the world, it is still illegal in Turkey to talk about what happened to Armenians during this era.

Back in 2015, Kim, Khloe, Kanye, North and some "K" named Kardashian brethren went to visit their Motherland for the first time. You can watch a re-cap here.

Posted by Christine KAURdashian at 3:28 AM