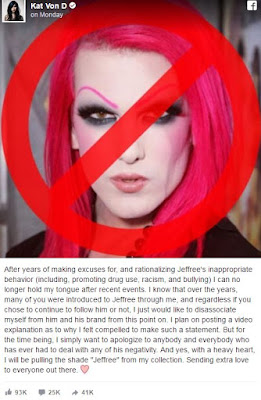 Okay, so a little drama in the MUA world.
Of course, I know Kat Von D from her LA Ink fame and Jeffree Star from social media. If you don't know, he's an androgynous make-up maven, singer and social media star who became famous through MySpace and now has a booming cosmetic line.

I guess they've been besties, but now Kat's had enough.
Kat says:
After years of making excuses for, and rationalizing Jeffree's inappropriate behavior (including, promoting drug use, racism, and bullying) I can no longer hold my tongue after recent events. I know that over the years, many of you were introduced to Jeffree through me, and regardless if you chose to continue to follow him or not, I just would like to disassociate myself from him and his brand from this point on. I plan on posting a video explanation as to why I felt compelled to make such a statement. But for the time being, I simply want to apologize to anybody and everybody who has ever had to deal with any of his negativity. And yes, with a heavy heart, I will be pulling the shade "Jeffree" from my collection. Sending extra love to everyone out there.


Of course, Jeffree didn't stay quiet and took to Twitter to give his take:

There are 2 sides to every story. The truth will come out later today.
— Jeffree Star (@JeffreeStar) July 19, 2016

For everyone that is thriving off of someone else's drama, I pray that you find peace within yourself.
— Jeffree Star (@JeffreeStar) July 19, 2016 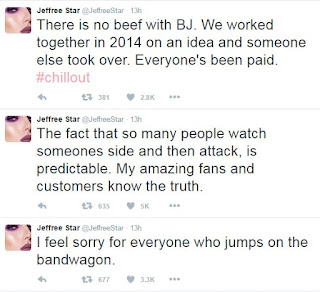 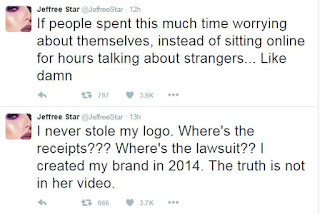 Then, Vancouver beauty blogger Julie "Princess Joules" Vu went on YouTube to give her take...which
wasn't so positive for Jeffree. Well, basically she's mad that she DM'd him on Instagram mentioning how she's endorsed his products in the past but he never gave her the kudos she deserved.

Jeffree is no stranger to beef, He's had infamous feuds with Kylie Jenner's lipkit and with Beauty Blogger Makeup Shayla.

Is it me, or does all this drama seem unnecessary? Couldn't Kat and Jeffree hashed this out in private?
I don't think Joules needed to chime in either. -____-
These are the lamest receipts I've seen here.

Posted by Christine KAURdashian at 4:46 AM