Okay, I'm so confused.
Is this REALLY Rob in Blac Chyna's instagram photo?

Rob didn't explain much on his rarely used account either.
Either way this is one messed up situation.

For those of you who don't know....
Blac is Tyga's baby-mama...and former BFF of Kim Kardashian.
They broke up, and we know Tyga is dating the youngest of the Kardashian-Jenner clan, Kylie.
Now, it seems Blac is now dating Kylie's brother...Rob.
I mean, she doesn't go right out and say it's rob...but those tattoos look familiar. 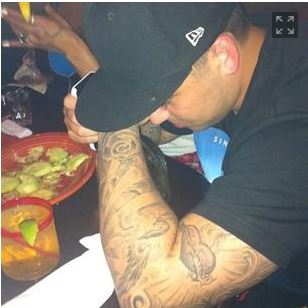 It didn't help that Khloe tweeted these cryptic tweets the other day.

You can do anything. But never go against the family
— Khloé (@khloekardashian) January 25, 2016

You guys do know I have about 100 family members correct? I was referring to a family member who just bailed out of doing my talk show today
— Khloé (@khloekardashian) January 25, 2016

I'm assuming she's not talking about Rob flaking on her show because the guy's been in hiding for months. Why would he be on Kocktails with Khloe anyway?
I mean, she got over it. It looks like Tyga ended up sliding in and taking the empty slot.


Regardless, we'll find out who the family member was who flaked eventually on a episode of KUWTK.
However, People magazine is reporting Kylie is livid over the situation and TMZ is reporting that Rob is living at Chyna's house and using her workout equipment to get in shape....but I mean, he could just see Gunnar.
There are also rumors that Khloe kicked Rob out of her house because of this betrayal.

Also, this isn't the first time Blac hopped to one man...I mean, she literally posted a photo on the gram not too long ago alluding to Future being her new man and he shut that down real quick.

In the mean time, Blac Chyna fans are taking to Khloe's Instagram and posting plenty of four-leaf clovers to remind her of her brother's actions.
For your entertainment, search the hashtag #blacrob on Instagram and Twitter for nonstop rabbit hole of good laughs.

Posted by Christine KAURdashian at 5:01 AM