Alan Rickman, the actor who played Severus Snape in the Harry Potter series and Hans Gruber in Die Hard died Thursday following a short battle with cancer.
'Born to a working-class London family in 1946 and trained at the prestigious Royal Academy of Dramatic Art, Rickman was often cast as the bad guy; with his rich, languid voice he could invest evil with wicked, irresistible relish," the Associated Press reports

Rickman's Harry Potter castmates along with the author J.K. Rowling took to social media to express their condolences.


There are no words to express how shocked and devastated I am to hear of Alan Rickman's death. He was a magnificent actor & a wonderful man.
— J.K. Rowling (@jk_rowling) January 14, 2016 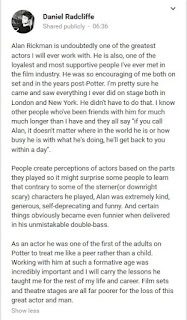 I was at Leavesden Studios today when I heard the news. As I walked through the canteen I thought of Alan queuing up for his lunch with us mere mortals. I recalled the trailer in which he offered me some of the greatest advice I ever received about this mad profession we shared. Being back in those corridors made me remember a lot of things and I will treasure those memories all my life. He inspired my career more than he ever knew and I'll miss him.
A photo posted by Matthew Lewis (@realmattdavelewis) on Jan 14, 2016 at 7:07am PST

Rickman is survived by his partner of 50 years, Rima Horton, whom he married in 2012

Posted by Christine KAURdashian at 9:36 AM