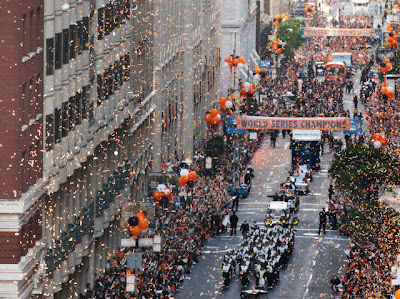 Happy Halloween from Christine Kaurdashian and also a big congratulatory high-five to the San Francisco Giants!
The City has been taken over by a sea of orange and black, but not for All Hallows Eve.
The Giants World of Champions parade is underway as the team wins their 2nd World Series championship in two years.
It's a very exciting time in S.F. Even though I'm an Oakland A's fan, I do like a fairytale story when it comes to sports. The G-Men were counted out and people thought they weren't going to make it this far! Also, players like Barry Zito (who is a former A!) were counted out at the last World Series and here this year....he's one of the main reasons why this team beat St. Louis!
Then, they went on to sweep the Detroit Tigers (whom I hate bc the A's lost to them)!
The last time an NLCS team swept the W.S. was in 1990!
Posted by Christine KAURdashian at 1:36 PM