Idol's Brown Knew She's Be Next to Go

Turns out American Idol's latest loser knew she was going to get the boot. 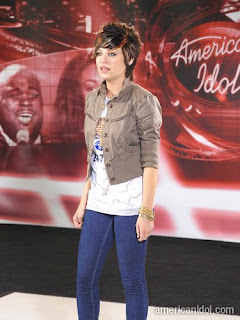 According to the Associated Press, "The 24-year-old from Amarillo, Texas, was voted off the Fox show last week after singing a lackluster rendition of the Rolling Stones' "Ruby Tuesday." She says her performance landed her in the middle of the group, which she classifies as a risky place for a contestant."

It's okay boo, you already got your foot in the door! And if we've learned anything from the Fox show....the constestants usually do better than the actual winners. Well, sometimes.
Posted by Christine KAURdashian at 4:14 PM